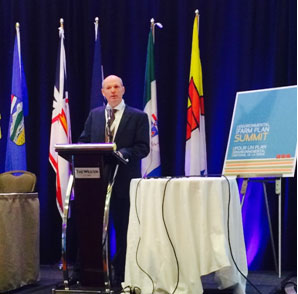 Upon his arrival at ARECA in 2015, EFP Director Paul Watson began reaching out to his provincial counterparts to evaluate the possibility of the provinces working together to harmonize key environmental components of the EFP. In late spring of 2016, the Alberta Wheat Commission showed their support for this initiative. The outcome? The National EFP Summit in November.

The initial meeting in 2015 was intended for provincial delivery organizations; then industry such as McCain’s, Dairy Farmers of Canada, and Pulse Canada joined the conversation. Demand for a baseline national EFP was clear and Paul pursued this with the support of ARECA and the Government of Alberta. Paul worked steadily behind the scenes developing consensus, bringing stakeholders together, and drafting a terms of reference for an NEFP.

The NEFP Summit not only served to showcase the many unique features of Canada’s EFP, but provided an effective forum to gauge cross-commodity, full-value chain support for the move toward a national program. Positive remarks offered by Pat Finnigan (MP Miramichi-Grand) and Jean-Claude Poissant (Parliamentary Secretary to the Minister of Agriculture and Agri-Food) relayed the federal government’s commitment to provide continued support for Canada’s EFP as it harmonizes nationally. In the future, this will enable farmers and ranchers to better meet sustainable sourcing requirements here in Canada, and around the world.

The closing discussion covered a variety of opportunities that will be explored by the NEFP Steering Committee. The item that received almost unanimous support was the creation of a national program that could address national standards with flexibility to address regional differences and accommodate both farmers and industry.

We invite you to contact us about how this process will affect your farm.